Part 4 begins where part 3 left off…

Patricia looked at the outdated phone, with the frayed ended cord hanging off the end, and was flooded with inner questions as it continued to ring.

Was the woman she just dreamed about the same one who warned them about the potential disasters?

What happened to her that caused the man in her dream to kill himself?

Why was her daughter, Macy, drawn to the old phone from the attic in the first place?

As she stumped herself with the questions, she failed to notice that Macy has woken up from her punishment nap and was standing beside her. She only noticed when the child startled her by asking a question.

“You gonna answer that, Momma?” She asked.

Patricia practically jumped out of her skin for a moment, then gathered her composure and looked down at her daughter to answer.

“This is just weird, Baby…old phones with no end on the cord do not just ring….”

“But…it’s ringing Momma…and I talk to Penny….and she tells me about things that are going to happen to us…she has helped us….2 times…maybe….just maybe….she needs help.”

She looked at her daughter with concerned eyes and wondered if her young child new more than what she was letting on..

She knelt down and looked at Macy in the eyes and asked,

“What exactly do you know about the lady in the phone you call Penny? Because, I get the feeling you haven’t told me everything.”

Macy shuffled her feet and her eyes shifted toward the ground, sighed and then answered.

“She tells me it’s dark and cold where she is…and…and…she needs help to be…free to move on…I don’t know what that means….but…but…she said she’s been waiting a REAL long time for someone to answer her call….”

As Macy finished the phone stopped after a half ring.

Patricia let the wave of the chill that traveled up her spine dissipate and watched as her goosebumps rose and the hairs on her arms stand on end as she turned to look at the phone that suddenly stopped ringing.

The silence hung in the air like a fog.

It was broken by a question from the child.

“We have to help, Momma…..you always say that helping others will help us….”

“Honey…we don’t even know who she is….she is a voice in an old phone that shouldn’t even work…” Patricia replied.

After some thought about the situation, Patricia decided to give the realtor a call. She figured none of this started to happen until the phone was found in the attic of the house they had moved into a few short months ago.

She gave her a call on her cell phone and asked if she could tell her anything about the history of the house.

“Well…what would you like to know?” The realtor asked.

“…..anything like past occupants hearing….noises and such…” Patricia replied.

“Ummm…not to my knowledge…but the house was vacant for quite some time…and by quite some time I mean about 14 years. The owners who are selling to you just wanted to get out from under it. They fixed it up enough to be able for us to do something with it and moved out of state. You got quite the deal on it, that home is over 100 years old….”

“Yes, we know…we love the house…we just thought it would be fun to know some things about it…Macy is 9 you know….she kinda wishes it was haunted or something like that…” Patricia half heartedly chuckled as she spoke to try to make the statement as believe able as possible.

“Well,” the realtor replied, ” you could always go to the historical commission downtown…all homes as old as yours are are listed there. Maybe they could help. I gotta run…I have a showing at 2. Good luck!”

Patricia hung up the phone and looked at Macy and said,

“Get your shoes on…we are headed into town.”

“Can I take the phone with us…in case Penny calls?”

“I guess so.” She hesitantly replied but prayed to herself that the phone did not ring in public.

They reached the towns historical commission in about 20 minutes. Patricia walked inside, with Macy and the phone in tow.

They walked up to the counter and greeted the old man who sat behind it.

“Hi, we were wondering if we could find out anything about the home we are living in. We are told it is over 100 years old.”

“Sure,” the man said, “just give me the address and I will get you what I can.”

He looked down at Macy and smiled. He caught a glance of the phone as he took the address from Patricia’s hand and asked,

“Hey young lady…that phone is quite different from the usual ones I see in here. May I see it?”

Macy looked at her Mom, who cautiously nodded.

She handed him the phone. He looked it over and said,

“You know…this type of phone came out in 1919. It was the first phone used to make a 2 way long distance call on. This one still has the date stamp in the bottom.
Looky here,” he said as he turned the phone over.

Sure enough, the date stamp, although covered with a rusty substance said 1919.

“You best be careful with this, dear. It is probably worth something. Give me a minute and I will see what I can find.” He said as he handed the phone back.

He came back after about 10 minutes.

He sat down with a folder and sighed. He then opened it up and spoke.

“Well…your home is over 100 years old….but it has not been in this county for that long.”

Patricia looked at him with surprise and replied,

“I mean…it has been a part of this counties history for about 85 years….but it was built and moved from Haven before that. I even have a picture in the file of the house being moved. To get any real history you would have to go there. It is about 50 miles west of here.” He said as he looked up at a pale Patricia and handed her the picture. 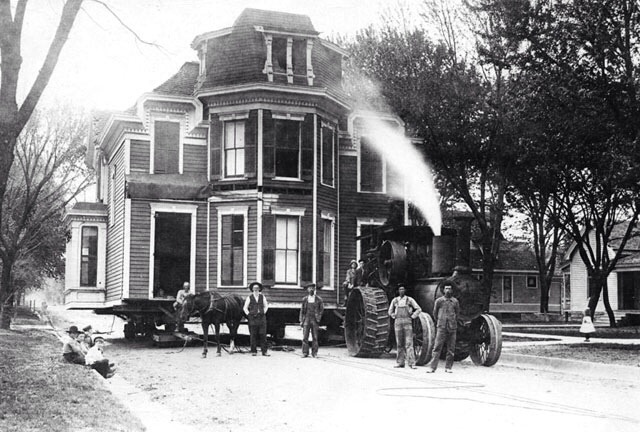 “….Haven?” She slowly replied as she looked at the black and white picture of her home.

“Yes, ma’am. I even have the name of the house movers who did the job. Very reputable and have been around since homes have needed to move.” He said with a smile as he wrote down the information and handed it to her.

She took the slip of paper, thanked him and returned to the car. She sat behind the wheel and opened the slip which read,