She stood in front of the mirror, like she did every morning, painstakingly applying the makeup she needed to look presentable to the outside world.

She pulled back her shoulder length hair and tied it back with a band. First the base, a bit heavier application in some areas, lighter in others. Then used the brush to apply rouge to her cheeks. She reached into her makeup bag, picked out a darker color of eyeshadow, and looked back into the mirror, ready to apply. Her reflection stared back at her, arms crossed and began to talk.

“When is enough going to be enough?”

She froze. Unable to reply to herself. A chill ran up her back and the hairs on the back her neck stood up. She continued to stare….at herself.

“Yes…it’s me…I mean you…talking to me…I mean you…Ughh it doesn’t matter…..I have had enough. That face paint of yours does not hide what he does to us. We look like a sad clown. If you won’t…”

“WHO ARE YOU TALKING TO IN THERE? HURRY UP I GOT THINGS TO DO!” Her husband yelled from the other side of the door.

She looked away from the mirror and frantically put the rest of her makeup back into the bag and turned and opened the door.

“I was just talking to myself. I will finish my makeup in the car before I head to the store.” She sheepishly replied without looking him in the eye as she scooted past him.

“Good idea. Pick me up some beer. You spilled my last one last night….. And hurry up I need it before I go meet the guys.” He demanded.

“Ok ok I will be quick, honey.” She said as she walked out the front door and headed to her car.

He walked into the bathroom and pulled the door shut behind him. He grumbled as he began to relieve himself. “She better hurry if she knows what’s good for her.” He zipped himself up and went to the sink and turned the faucet on. The cool water he splashed from the faucet up to his face calmed his hungover nerves. He pulled the towel from the holder beside the sink to dry himself and looked into the mirror and was taken aback by his wife’s reflection looking back at him.

“When is enough going to be enough?”

He rubbed the knuckles of his index fingers into his closed eyes and refocused on the mirror and said, “What the…I really must have drank too much…”

“I used to be a confident, beautiful woman until I married you. Now I am a remnant of a human…a slave to you and your demands…a punching bag when I deny your requests. Well…enough is enough.” The reflection stated.

“This isn’t real…I must still be dreaming…mirror, mirror on the wall…you bear the reflection of the one I ain’t scared of AT ALL!!”

Finishing that statement, he balled up his right fist and thrust it at his wife’s reflection in the mirror.

He looked at his hand, which started to bleed profusely from the shattered glass. Then looked back at the broken mirror.

He had hoped to see his own reflection within the broken shards of glass. What he did see were the reflections of every woman he had ever put his hands on staring back at him with evil, eager smiles on their faces.

His current wife’s battered reflection spoke for the army of many that awaited him.

“We are a collection of the damage trail you have left in your violent wake for control. The women assembled here are the battered reflections of the pain that you have inflicted upon their human counterparts. Enough is enough. You breaking the mirror has effectively and unknowingly broken the cycle. They will not fight back out of fear. We will fight back…because of it!”

With that, a multitude of hands reached out from within the broken mirror and grabbed him and yanked him to the reflection side.

Leaving behind only the gold wedding band , which he wore, promising to honor and protect the one he married until death do they part.
_________

She returned home….beer in hand about 30 minutes later. She rushed into the house to pass it off to her husband in hopes she didn’t take too long.

“Honey?…..honey…I got your beer…I will put it in your cooler and ice it down for you…honey?” She questioned as she walked around the seemingly empty and quiet house.

She walked into the bedroom and knocked on the bathroom door….

She turned the knob and slowly walked in. Everything was in place…..except her husbands wedding band was sitting in the sink on top of a slip of paper. She moved the ring over and picked up the note. It only contained 3 words…and was written in her handwriting… 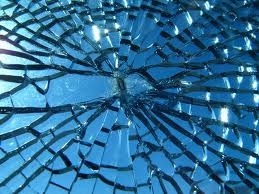